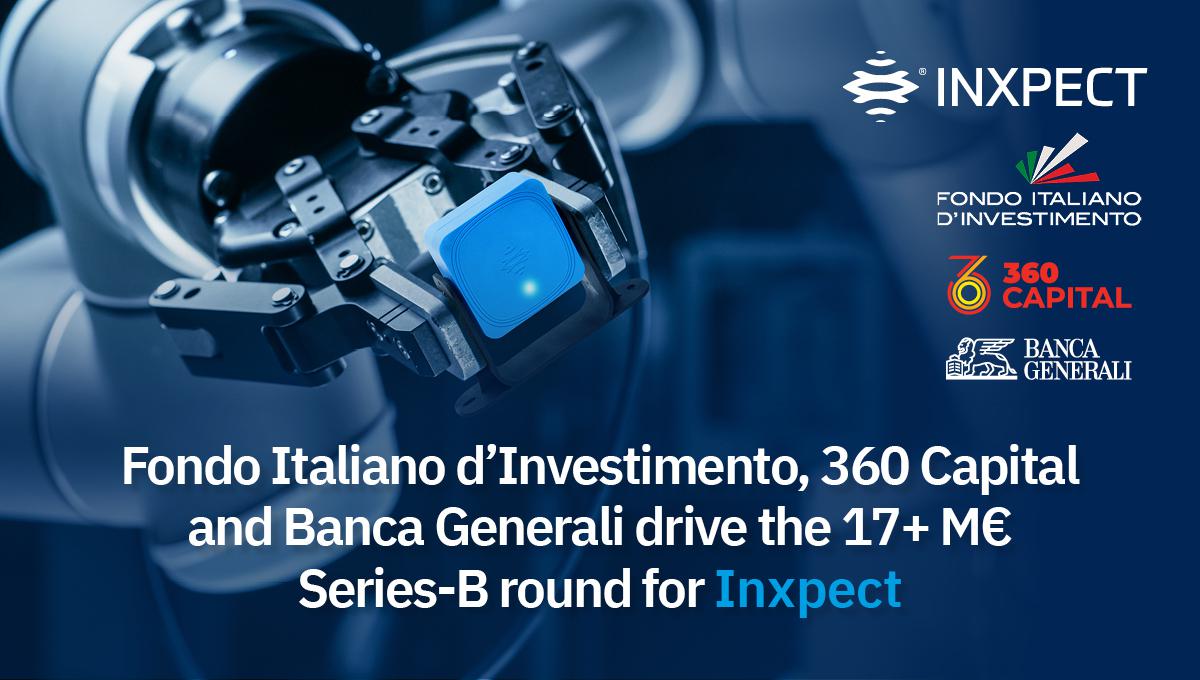 Inxpect, founded in 2015 by CEO Luca Salgarelli, former researcher at Bell Labs and professor of Telecommunications Engineering, is a world leader in radar sensors for robotics and industrial safety applications.

Inxpect designs and manufactures the world's first and only radar sensors certified for industrial safety applications, revolutionizing the interaction between humans and machines. With more than twenty international patent families, the company is now investigating 3D radar imaging technologies to make collaborative robotics a pervasive technology applicable to a wide range of industrial applications.

Inxpect currently employs more than 40 people in Italy and Israel. Sales doubled in 2020 and the company is building a solid pipeline for its products, particularly in the automotive, logistics and packaging sectors.

After this round, Inxpect will focus on accelerating its R&D investments and on expanding its commercial presence within the collaborative robotics market, which represents a 40 billion euros opportunity.

"Closing an equity financing round during a global crisis was not easy. We are thrilled to be able to take our vision to the next level with the support of an experienced tech growth fund like FITEC.", said Luca Salgarelli, Founder & CEO, Inxpect.

"Inxpect developed a world class product line and has the potential to become one of the world leaders in industrial sensors for collaborative robotics. We are looking forward to working with Luca and his team to support the company vision", said Claudio Catania, Senior Partner, FITEC.

As part of the transaction, Claudio Catania will join Inxpect’s Board of Directors. Inxpect is FITEC’s sixth high growth tech investment since 2017.

Founded in late 2015 by Luca Salgarelli as a spin-off of the R&D activities of TSec Srl and Superpartes SpA, Inxpect SpA is a company that designs and manufactures smart radar sensors. The company has developed "LBK System", the first - and to date the only - radar system in the world certified for industrial safety applications. Inxpect sensors are able to detect with certified safety the presence of operators in working areas of any machine or industrial robot, significantly increasing both the safety of operators and the productivity of the machines. The system is now proposed to the market by dozens of distributors and specialized integrators around the world, and it is in the product portfolio, as a brand label, of major companies operating in the field of automation and industrial safety. The company currently employs more than 40 people (including 15 with a PhD), has headquarters, R&D and production in Italy (Brescia and Florence) with part of the R&D also in Israel (Haifa), and in 2019 achieved revenues of 1.2 million euros.

Fondo Italiano d’Investimento SGR (“Fondo Italiano” or “FII SGR”) was created in 2010 on the initiative of the Italian Ministry of Economy and Finance (MEF) and its shareholders include CDP Equity, Intesa Sanpaolo, Unicredit, Abi and Confindustria. The main goal of Fondo Italiano is to favor the growth of the Italian economy by managing closed-ended funds. The funds managed by FII SGR are aimed at conveying patient capital to Italian companies of excellence with a return on investment in line with international benchmarks.

To date, FII SGR manages a total of 10 closed-ended investment funds reserved to qualified investors, with Assets Under Management in excess of 3 billion euros and operates both through direct investments and fund of funds’ activity.

FII SGR considers sustainability a fundamental value and is committed to integrating environmental, social and governance (ESG) criteria into its investment activities.

360 Capital is a Venture Capital firm investing in Europe in early stage companies with a high rate of Digital Innovation or developing cutting-edge Deep-Tech technologies. For more than 20 years, the company has been accompanying talented entrepreneurs in the creation and development of successful companies such as Exotec Solution, Yoox, Innoviz, Everli, Casavo, Sophia Genetics. Supported by a team of professionals among Milan and Paris, 360 Capital manages assets of 400 million euros and a portfolio of about 60 investees.

Banca Generali is a leading private bank in Italy in financial planning and wealth protection for clients, with a network of private bankers and consultants at the top of the industry in terms of skills and professionalism.  Listed on the Milan Stock Exchange since November 2006, it manages on behalf of its clients over 74 billion euros in assets (as at 31 December 2020) from Assicurazioni Generali. In June 2020, Banca Generali launched BG4Real, the program to connect private savings with the real economy through investments in innovative SMEs. The program currently counts on two investment instruments dedicated to Banca Generali Private customers and managed by the Sgr 8a+ Investimenti: an alternative investment fund - 8a+ Real Innovation - and an Eltif - 8a+ Real Italy Eltif.

Press Release
Previous
Need more safety?
Next
UL and Inxpect have created an entire new class of certified products
Back to the News